Commport’s Integrated EDI software as a service solution is a proven and cost-effective platform without the initial outlay associated with traditional EDI Software.

Get a Free Quote Now

An Integrated EDI solution translates your inbound documents, like purchase orders, from your trading partners’ EDI files into a format that can be imported directly into your ERP, accounting or other business system.

When you’re ready to send out invoices, PO acknowledgments or other outbound documents, it takes the format exported from your system and translates it into the EDI formats required by your trading partners.

Translation is fast and reliable – so you can focus on your business.

The solution grows easily as your business grows and adding new customers is easy. 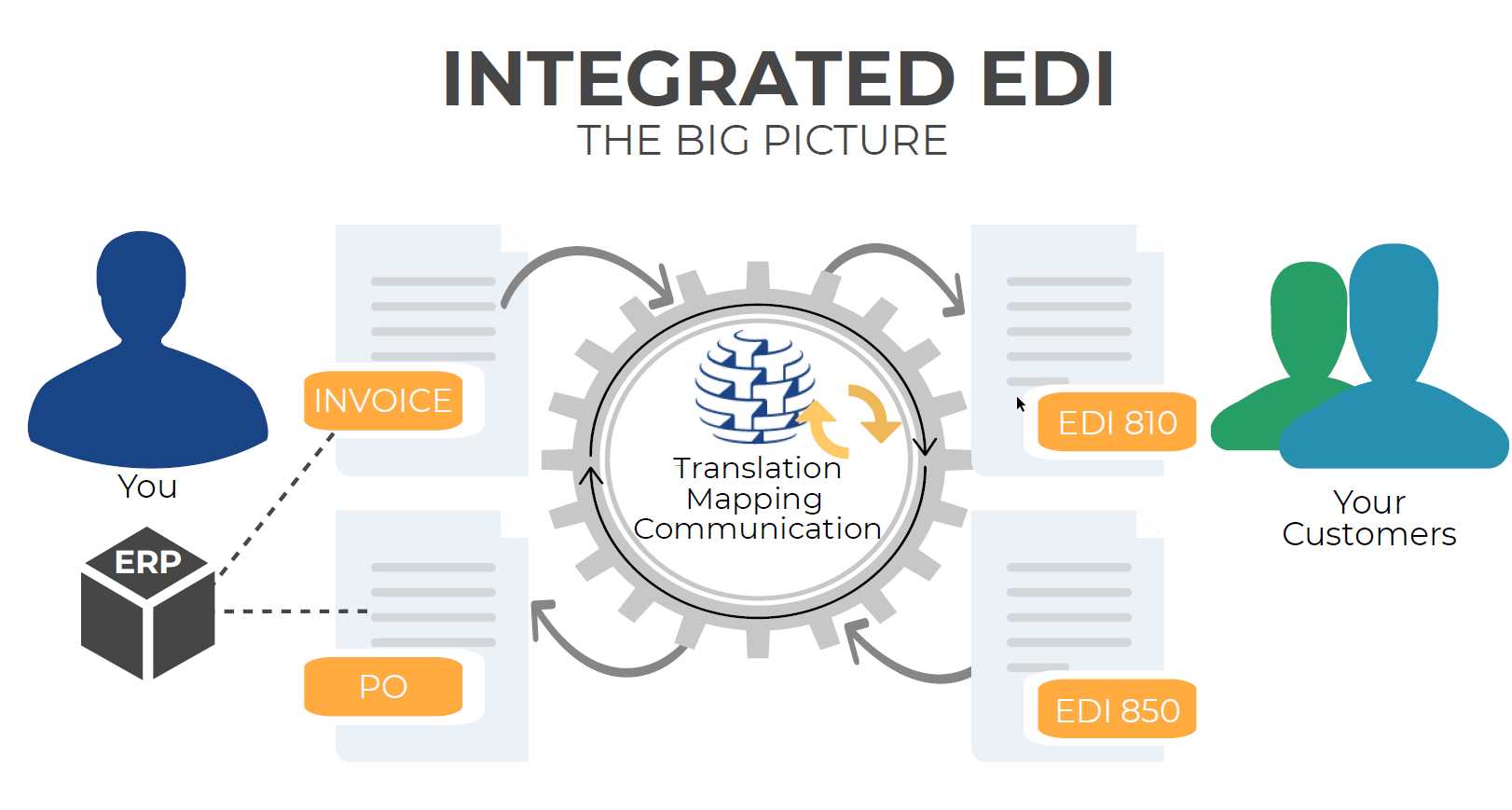 What people say about it

Commport has proven to me to be one of the best partners I have had the pleasure of working with. From customer service to account management to education, Commport has excelled in every aspect. Without your partnership, we wouldn’t have achieved EDI progress our organization is at today. Thank you for your support!

Thanks for all the hard work made for this project, you made us feel quickly confident with our choice of a EDI provider. It was a pleasure dealing with you and we are confident that future projects with Commport will be as good of an experience as the start was. 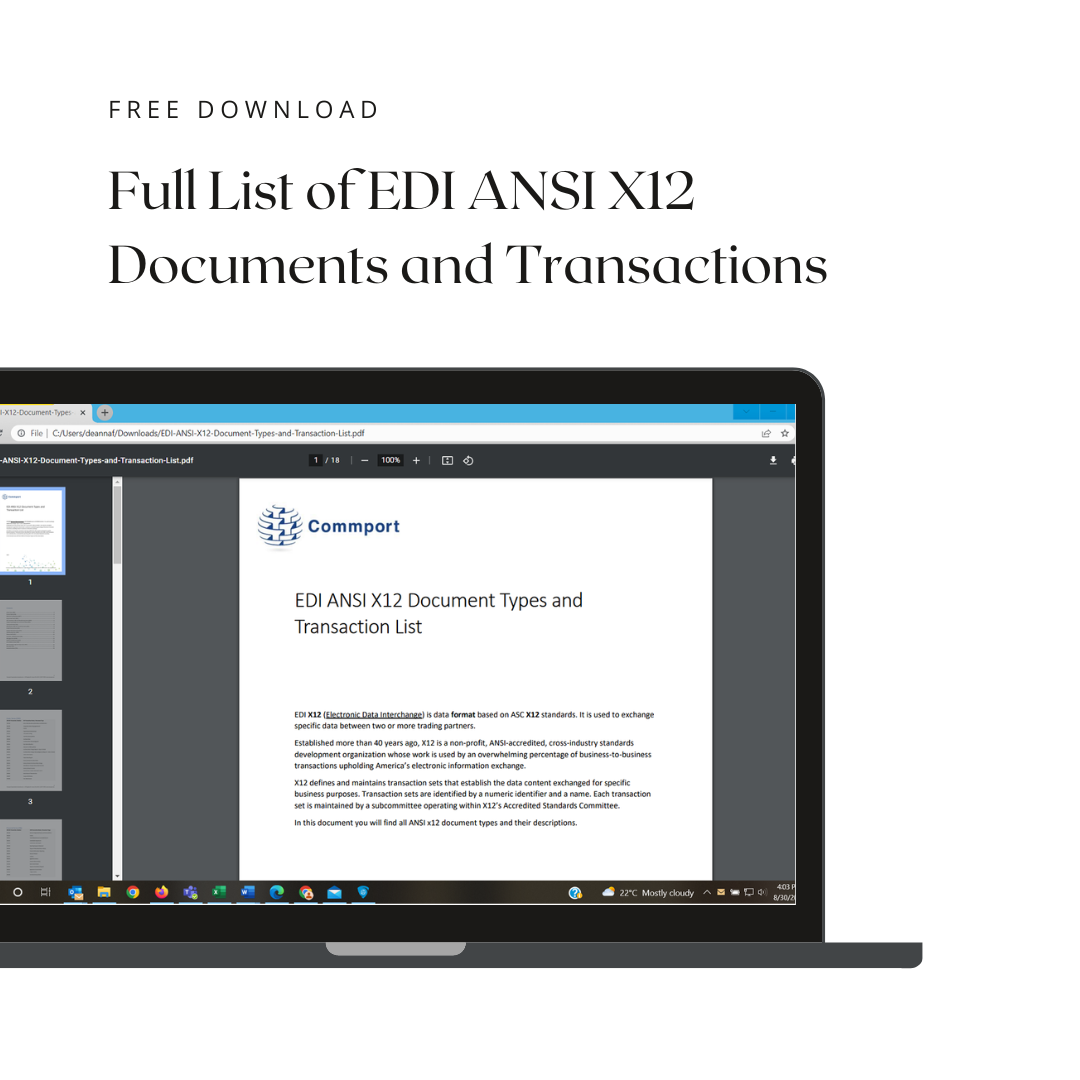 EDI X12 is a data format based on ASC X12 standards. It is used to exchange specific data between two or more trading partners.

Established more than 40 years ago, X12 is a non-profit, ANSI-accredited, cross-industry standards development organization whose work is used by an overwhelming percentage of business-to-business transactions upholding America’s electronic information exchange.

X12 defines and maintains transaction sets that establish the data content exchanged for specific business purposes. Transaction sets are identified by a numeric identifier and a name. Each transaction set is maintained by a subcommittee operating within X12’s Accredited Standards Committee.

Each EDI X12 transaction type is differentiated by a unique 3-digit number and there are more than 300 different types of X12 EDI standards for various industries from finance, government, healthcare, insurance, banking, transportation, and many more. ASC also contributes to UN/EDIFACT messages that are used widely outside of the United States and develop standards for CICA (Context Inspired Component Architecture) and XML schemas.

What is Integrated EDI? Expand

An Integrated EDI solution translates your inbound documents, like purchase orders, from your trading partners’ EDI files into a format that can be imported directly into your ERP, accounting or other business system.

Integrated EDI Software takes the format exported from your system and translates it into the EDI formats required by your trading partners.

What is EDI Compliance? Expand

EDI compliance refers to a business's capacity to accurately send and receive EDI transactions according to the order data requirements of its EDI trading partners. Each document must adhere to a specific EDI format to ensure the successful exchange of EDI documents.

This standard was originally conceived in 1987 by the EAN General Assembly and was to be developed on the then emerging international UN/EDIFACT standard. The EANCOM messages, maintained by GS1, are more detailed in nature compared to the TRADACOMS message set. EANCOM was originally developed for the retail sector and has subsequently grown to become the most widely used UN/EDIFACT subset and is now found in a variety of other industry sectors such as healthcare, construction and publishing.

The Voluntary Inter-industry Commerce Standard is used by the general merchandise retail industry across North America. It is a subset of the ANSI ASC X12 national standard. VICS EDI is being utilized by thousands of companies, department and specialty retail stores, mass merchandisers and their respective suppliers. In 1988 GS1 US became the management and administrative body for VICS EDI. GS1 US also manages the ASC X12 derived Uniform Communication Standard (UCS) for the grocery industry and Industrial/Commercial Standard (I/C) for the industrial sector.

United Nations/Electronic Data Interchange for Administration, Commerce and Transport is the international standard that was developed by the United Nations. The work of maintenance and further development of this standard is done through the United Nations Centre for Trade Facilitation and Electronic Business (UN/CEFACT) under the UN Economic Commission for Europe. The EDIFACT standard provides a set of syntax rules to structure, an interactive exchange protocol and provides a set of standard messages which allow multi-country and multi-industry exchange of electronic business documents. EDIFACT is widely used across Europe, mainly due to the fact that many companies adopted it very early on. EDIFACT has seen some adoption in the ASPAC region, however, there are currently more XML-based standards being used in this particular region today.

The Organization for Data Exchange by Tele Transmission in Europe is a group that represents the interests of the automotive industry in Europe. They are the equivalent of the Automotive Industry Action Group (AIAG) in North America. The organization develops tools and recommendations that improve the flow of goods, services product data and business information across the whole automotive value chain. ODETTE has been responsible for developing communications standards such as OFTP and OFTP2.0, constant improvement processes such as Materials Management Operations Guideline / Logistics Evaluation (MMOG/LE) and automotive-specific document standards as defined via the link below.

This is an early standard for EDI and was primarily used in the UK retail sector. It was originally introduced in 1982 as an implementation of the UN/GTDI syntax, one of the precursors of EDIFACT, and was maintained and extended by the UK Article Numbering Association, now called GS1 UK. The standard is more or less obsolescent since the development of it effectively ceased in 1995 in favor of the EDIFACT EANCOM subsets. Despite this it has proved durable and the majority of the retail EDI traffic in the UK still uses it today.

This organization develops standards and best practices to serve the needs of companies within the German automotive industry. The VDA has developed over thirty messages to meet the need of companies such as VW, Audi, Bosch, Continental and Daimler AG. Further information about these messages can be found via the link below.

The Health Insurance Portability and Accountability Act was enacted by the U.S congress in 1996. A key component of HIPAA is the establishment of national standards for electronic health care transactions and national identifiers for providers, health insurance plans and employers. The standards are meant to improve the efficiency and effectiveness of the North American health care system by encouraging the widespread use of EDI in the U.S health care system. The HIPAA EDI transaction sets are based on X12 and the key message types are described below.

This consists of a consortium of major computer, consumer electronics, semi-conductor manufacturers, telecommunications and logistics companies working together to create and implement industry-wide, open e-business process standards. These standards form a common e-business language, aligning processes between supply chain partners on a global basis. The RosettaNet document standard is based on XML and defines message guidelines, business processes interface and implementation frameworks for interactions between companies. Using RosettaNet Partner Interface Processes (PIPs), business partners of all sizes can connect electronically to process transactions and move information within their extended supply chains. Further information about RosettaNet PIP documents can be found from the link below.

The Society of Worldwide Interbank Financial Telecommunication was formed in 1973 and is headquartered in Brussels. SWIFT operates a worldwide financial messaging network which exchanges messages between banks and financial institutions. SWIFT also markets software and services to financial institutions, much of it for use on the SWIFTNet Network. SWIFTNet is the infrastructure used to exchange these documents and FIN, InterAct and FileAct are used to encode the SWIFT documents for transmission. The majority of interbank messages use the SWIFT network. As of November 2008, SWIFT linked 8740 financial institutions across 209 countries. The SWIFT document standard is split into four areas, Payments, Trade Services, Securities and Trading.